We don’t want to gush, but Drew embodies everything we’re looking for in our CrossFitters: Humble, supportive, consistent, smart, hard working, and helpful. Drew doesn’t know the words “quit” or “no”. He goes out of his way to make people feel at home at CFD and is always there with a helping hand. He’s also got his son working out with him, so he’s a great role model for Justin, who’s quite the CrossFitter himself. Here’s a deeper look into someone you need to know at CF Dynamo: a conversation with Drew Wansley

DW: Georgia Tech – been a Jacket since I was born, and graduated from there in ’89. 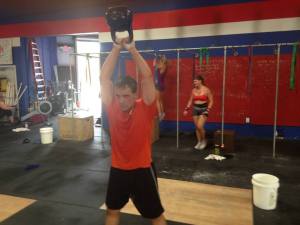 DW: It’s hard to pick a favorite, but probably pull-ups. Primarily because they represent what I couldn’t do as the “chubby kid” back in elementary school. Now that I can do them by the dozens, it’s kind of a delayed vindication. (And I haven’t even really figured out Kipping yet!)

DW: Wall Balls with the 20# ball – That 10’ red line seems VERY far away from my elevation challenged position (but honestly – I still like them as part of CrossFit as a whole, but I’d like ‘em better if I could just aim for the white line…)

CFD: Favorite WoD and why?

DW: Another one that is hard to pick. I like Cindy because that was the first time I got on the big boards, but I love the ones with a lot of variety like “Deck of Cards” and “12 Days of Christmas”.

DW: Don’t really have one of these. Even the ones I “hate”, I actually like (once I finish them anyway…). Eva and the 9/11 Memorial WoD have been the ones that were toughest to muscle through for me.

DW: Probably my Overhead Squat PR because everything about that movement felt so unnatural when I started – and that was with just the bar. To be able to lift heavy (for me) with decent form and balance on OHS gives me a big sense of accomplishment.

CFD: What’s your next short-term goal?

DW: To get my DU’s back. I had them for a while and lost them.

DW: To be able to do an Rx Isabel – even if it took me 30+ minutes… To me, Snatch is the most complicated thing we do. I’ll be happy when I can get one at 135, but to be able to do 30 would be amazing, regardless of how long it took me.

CFD: After 2 years of consistent workouts (412 by our count), how have you seen yourself change (mentally and/or physically) over that time?

DW: Physically is easiest to describe. I’m 25 pounds lighter than when I started, down two belt notches and in smaller jeans with “normal fit” instead of “relaxed fit”. According to the Dunk Truck, I’ve dropped my body fat percentage by more than 5%. In the mirror, I can see muscle definition where I used to just see skin and/or flab. Mentally – I am happier and feel better about myself. I’ve always been pretty easy going, but I think there is an underlying confidence that has grown over the past couple of years. I’m less likely to think “I can’t do that” now – both inside and outside the gym.

CFD: You’ve been at Dynamo now for nearly 2 years. What got you interested in CrossFit and why did you pick Dynamo?

DW: A friend of mine mentioned CrossFit in passing one day at lunch. He said something like based on what he read, it was the most effective workout you could do. Around the same time I happened to catch the CrossFit Games on TV and thought – man, I’d love to look like that Rich Froning guy… From there I read about CrossFit online to see what it was about and then I looked around for CrossFit near my house and found the Dynamo web site. I liked the intro class you were offering and figured “it’s just a month, if you don’t like it you can try something else”. I came in and have to admit it looked intimidating as I watched a 6:30 class wrap up their WoD. However, everyone was so friendly and once the intro class started, Kelly was awesome and did a great job making things seem less intimidating and after a couple workouts I was totally hooked (I was also totally soaking in Epsom salt baths, but hooked none the less).

CFD: What were you doing for your fitness before CFD?

DW: I have been an off and on runner (“jogger” is more accurate) for years (this year was my 26th consecutive Peachtree Road Race) and I have done more traditional weight lifting since college with a couple years off tucked in here and there. I lifted with buddies in college, but after that it was always pretty much solo with an occasional “stranger spot” at the globo gym. A standard bench-press, military press, lat pull downs and curls type of workout. The last several years I was really just going because it was routine – there wasn’t any fun or improvement in it anymore.

CFD: What would you say is your biggest accomplishment since joining CFD has been?

DW: There are so many, but probably the box jump and the rope climb. Those two things were so foreign to me before and I still remember that “Are you crazy???” feeling in my mind when Kelly told me to jump up on that little brown 16” box. Now, as my shins can bear witness, I can attack the 24” box with no fear. The 30” still intimidates me though – there is always another goal in CrossFit!

CFD: We all know you’re a huge hair band fan when it comes to workout music. What would be your dream concert and where?

DW: Hmm – that’s tough. I’ve been fortunate enough to see all of my hair metal faves. My dream would be some kind of crazy all day music festival where I could see Motley Crüe, Garth Brooks, Bon Jovi, Rush, Billy Joel, Pat Benatar and Jimmy Buffett all in the same day. I like all kinds of music (despite any snarky comments I may make about the music at the box…)

CFD: We just gave you a free airplane ticket and two weeks off work. Where are you going?

DW: Easy – the beach. White sands of the Gulf Coast – as deserted and unpopulated as you can find. No bars, restaurants, putt-putt or other distractions – just a beach front house with a screened porch, a beach tent and a comfortable beach chair.

CFD: Do you have a secret that you don’t mind sharing?

DW: Not really. What you see is pretty much what you get (and I already leaked my man crush on Rich Froning earlier…)

CFD: Quick, what’s your most memorable moment at CFD?

DW: The Open 2015 – the energy around the box was amazing during those weeks.

CFD: Funniest moment you can remember?

DW: I feel like I am laughing all the time (when I am not sweating and mentally pleading for this WoD to be over already…) up at the box. It’s hard to recall any specific moment, but I think there was one night after Oly when Kelly had gone out the office door and Kirby was standing at the back door and didn’t realize she was behind him. Unintentionally scared the bejeebers out of him… Kirby’s always amusing, but scared Kirby is really funny!

CFD: Thanks Drew for your time! We’ll see you Monday! Anything you want to add?

DW: Just a shout out of thanks to all the coaches and members who have helped me over the past couple of years. Many are still at CFD and others have moved on. It’s a fantastic community and the overall mantra of community, technique and intensity is what makes it different. I appreciate coaching that is as likely to say “you need to take weight off that bar – your form is suffering” as they are to say “come on, push yourself and add some more weight” and is always willing to help you scale or alter in order to accommodate whatever tweaked or sore muscle you might have that day. You guys are all awesome!

Make an appointment for your free "No Sweat Intro" or Functional Movement Screening with CrossFit Dynamo! It's free, informative, and can put you on the right path for you for your health and fitness goals!

Thank you for everyone who voted for us as the best CrossFit Gym in Forsyth County!

We've moved to a CrossFit Foundations class rather than the month long preparatory class. The class is a full-on 3 hour introductory class to all of our major movements along with chalk talk to understand why CrossFit done right is the most potent fitness regimen the world has ever seen! Contact Coach at 678-642-8046 to get yourself scheduled for a great way to learn CrossFit in a non-intimidating fashion!