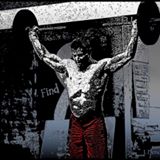 Coach John has been ranked as high as the 147th best CrossFitter in the world in his age group and is top 5 in Georgia!  John comes from a long, active sports career including being a collegiate tennis player and professional tennis instructor. He was a  sponsored triathlete, Southeast regional champion volleyball player, learned to play ice/roller hockey when he was old enough to break a hip, an “all arms” rock climber unfortunately,  likes to cycle long distances and is now a competitive CrossFitter. John has a passion for listening to your needs and laying out a path to help you reach your goals. Having a background in playing/teaching across a multitude of sports requiring hand/eye, balance, strength, and power, John can help you meet your goals, whatever they might be.

Programming:  John does has vast experience creating the daily workouts for the box and his techniques have been noticed by others, such as The Garage Games, where he lends his programming skills as well.

Why?  I had just gotten my first muscle-up three days before I decided to challenge the 21 necessary for this WoD.  It was slow, but I got through it and never once thought about quitting.  Also, this classic video, featuring some of the legends of CrossFit, is my favorite CrossFit vid.   If you don’t have time to watch the whole thing, go to minute 12:20 of the feed.  You’ll witness the heart of CrossFit through Eva’s struggles.

Why?   She’s such a popular benchmark and I absolutely suck at her.  She always leaves me in a quivering mass.  This will change, however. 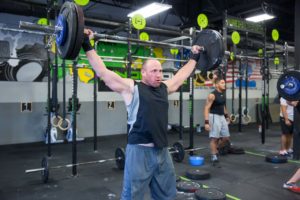 Eric started doing the normal gym circuit like we’ve all done but over time felt he wanted and needed something more.  He’d heard the chatter about Crossfit and thought he’d give it a try!  That’s when, in 2016, he stumbled onto Crossfit.  He feels it’s the perfect blend of a team like sport, combined with skill and fitness.  Crossfit has become more than just a way of staying healthy, and it’s more than just a hobby, it’s a genuine passion and “the box” has become an extended family.  Because of ongoing benefits he gets from Crossfit, personally, mentally and physically he wanted to take his passion to the next level and share it with others so Eric became a CrossFit Level 1 coach in 2017 and since has joined Dynamo’s staff.

Why? Really any WOD with a barbell I enjoy 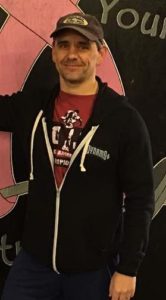 Coach Drew discovered CrossFit in the fall of 2013 after a friend had mentioned it at lunch as one of the most effective methods of getting fit.  Drew had been moderately active, jogging (he’s run the Peachtree Road Race every year since 1990) and weightlifting 4-5 times a week, but there wasn’t any enjoyment in it anymore or any signs of improvement.  He decided to give CrossFit a try and was completely hooked after only a couple of workouts.  Since that fateful week in November he’s been an avid participant, averaging between 4 and 5 workouts a week.

One of the best parts of CrossFit to Drew is the community and encouraging others.  He finds that helping someone do something they think they couldn’t do, or encouraging them to push themselves a little further than they thought they could go is one a very satisfying feeling.  After having been involved for a few years he took the next step and got his L1 Trainer Certificate so he could hopefully help others get hooked on the health, fitness and fun that is CrossFit.

Favorite WOD – Deck of Cards or Twelve Days of CrossFit…

Why – I like the variety of movements and the way they are structured.  The combo of gymnastic and lighter weight movements make it one I can Rx and feel like I am still finishing in the target time range.

Why – Long, hard slogs with mostly movements from which I do not take a lot of joy 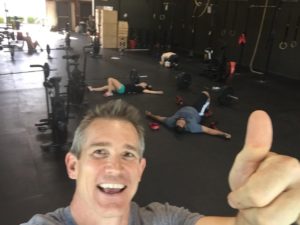 Coach Tim started Crossfit back in 2014 after losing about 65 pounds and needing to find something that would help him build some Muscle tone and keep him “plugged in”. He ran Cross Country in his senior year of high school but wasn’t very good. Other than that, he spent most of my teen and adult years overweight and with poor eating habits. He never really played any other sports in school or as an adult. He tried traditional gyms maybe 3 or 4 times, but he didn’t  think he ever lasted more than 6 months before getting bored and losing interest. What appealed to him about Crossfit from day one was the amazing sense of community and camaraderie. No matter how sore he was or how tired he felt he wanted to go back. Having no athletic background, he struggled more than most to learn the movements, but hungered to figure it out and be his best that day. After 2 years of growing and learning about his body and my nutrition, he realized it was important to share this knowledge and passion with others and decided to get his L1 so he could coach and help others experience the life change that he experienced, in this fun, caring environment. After 2-1/2, years his wife decided to try it out and fell in love for the same reasons he did. They now get to grow and learn together which he loves.

He doesn’t really have a favorite wod, but loves the fact that although there are so many people from so many places and backgrounds, we come together and become like family. 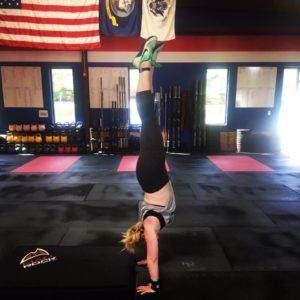 Coach Kelly was extremely active as a kid, played sports of all kinds – Soccer, Swim Team, Intermural Basketball, Volleyball and Tennis, Sprinter, earned the Presidential Physical Fitness Award for three consecutive years, the sport of fitness was her life before CrossFit was even conceived. Then life set in and the playing stopped, until she found CrossFit in 2011. So now as a grown adult, she get to play again and is in the best physical condition she has ever been in her life.

In 2010, she was diagnosed with arthritis in her lower back and needed to find something that would help keep her hips loose to relieve the strain on her lower back. She got into road cycling and took to it like a duck to water.  She always wanted to increase her endurance ability but like a duck that is also how she runs, so endurance running never interested her. After a year of cycling 150 miles a week on average, a friend introduce her to CrossFit. She quickly found out her silo approach to fitness was not as great as she thought.  She had no core strength when she walked into the CrossFit box. Strength is vital for someone like her with arthritis who needs those muscles to protect their joints and bones, not to mention the constant varied functional movements that keep the joints fluid. Years later, she can say she has all-around fitness and strength that helps her every single day in ways she never would have imagined.

She wanted to become a CrossFit trainer so she can help others unleash their inner potential that they don’t even know is there just waiting to be released.

Why?   With so much intensive work on your legs in all three movements, the rounds just drag out and leave you devastated by the end.  Not to mention the fact that she get blamed for her.  🙂

Make an appointment for your free "No Sweat Intro" with CrossFit Dynamo! It's free, informative, and can put you on the right path for you for your health and fitness goals!

Thank you for everyone who voted for us as the best CrossFit Gym in Forsyth County!

We've moved to a CrossFit Foundations class rather than the month long preparatory class. The class is a full-on 3 hour introductory class to all of our major movements along with chalk talk to understand why CrossFit done right is the most potent fitness regimen the world has ever seen! Contact Coach at 678-642-8046 to get yourself scheduled for a great way to learn CrossFit in a non-intimidating fashion!